Northern white-cedar (Thuja occidentalis) is also called eastern white-cedar, arborvitae, and swamp-cedar. The name arborvitae or "tree of life" dates from the 16th century when the French explorer Cartier learned from the Indians how to use the tree's foliage to treat scurvy.

The rot- and termite-resistant wood is used principally for products in contact with water and soil.

The main range of northern white-cedar extends through the southern part of the eastern half of Canada and the adjacent northern part of the United States. It grows in both pure and mixed stands, mostly in swamps but also on uplands.

Northern white-cedar has a thin layer of nearly white sapwood that surrounds the light brown heartwood; the growth rings are distinct, delineated by a darker band of late wood. The wood has a characteristic, pleasant aromatic odor of the cedars. It is even-grained, finely textured, and has the lowest density of any commercial domestic wood. A cubic foot of air-dry wood weighs about 19 pounds.

The heartwood is resistant to decay and subterranean termites. Drying of northern white-cedar is easy. It has little tendency to shrink or warp. The wood is easy to work with hand tools and has average machining qualities. It glues well, holds paint well, and stays in place with little dimensional change. However, because of its low density, the wood is soft and has low mechanical properties such as bending strength, compressive strength, hardness, stiffness, shock resistance, splitting resistance, and nail- and screwholding ability.

In recent years northern white-cedar has been used principally for rustic fencing and posts. For example, Maine used 24 million board feet of white-cedar for fencing in 1970 and Michigan produced 2.9 million posts in 1972. Other important uses, at least in certain areas, include cabin logs, lumber, poles, and shingles. Northern white-cedar sawtimber generally has a low yield of usable lumber because the logs are often knotty, crooked, or hollow. The better quality lumber is used for building construction in places where a high degree of durability is needed. The low grade material is used largely in the production of shipping containers.

In the past, northern white-cedar was one of the major species used for utility poles in the north central and northeastern United States. However, this use is minor today mainly because of the increased size required for electrical poles and the conversion away from telephone poles. Even though northern white-cedar is naturally resistant to decay and termites, most utility and building poles are now treated with preservative for additional service life. Smaller amounts of northern whitecedar are used for piling, lagging, pails and tubs, ties, boatbuilding (especially canoe ribs), tanks, novelties, and woodenware. Small amounts are also used for fishnet floats, duck decoys, and imitation minnows.

Recently, in Michigan, small amounts of northern white-cedar have been used for pulpwood. The species makes acceptable kraft pulp; printability and opacity are excellent and strength is good. But debarking can be a problem, along with chipping, cooking, washing, and bleaching, unless special techniques are used. Further, northern white-cedar yields less pulp per cord than other species because of its low density. Recent tests indicate that white-cedar is also an excellent particleboard material. 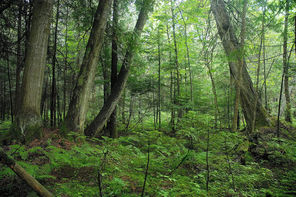 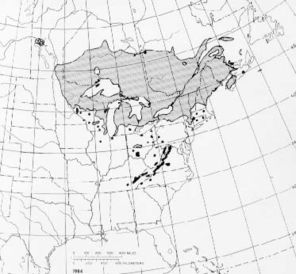